July 25. On stage at the 39 Days of July Festival. Venue: Duncan Showroom, Duncan, BC 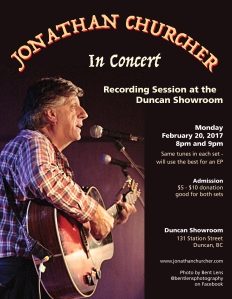 The Duncan Showroom is the best place for this ‘live from the stage’ recording event. The venue has excellent audio and lighting equipment in a small, comfortable room loaded with atmosphere. I will do original tunes for an audience that will, hopefully, include you. I’ll do the same songs in each of two sets and take the best of each to make an EP. Your donation of $5 – $10 gets you in for both sets – at 8 and 9pm.

Go to minute thirty (0:30) of this YouTube link for the start of a short set at the Duncan Showroom

The Banff Centre for the Arts and Creativity nestled in the Canadian Rocky Mountains.

The Ballad of Walter Edgi

Where I Want To Be

The Ballad of Springhill 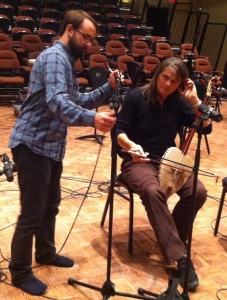 Engineer Zak Miley and igil player Catherine Thompson at Banff Centre December 2013 for recording of The Ballad of Springhill.

Tunes from the 2011 CD
Acasta Island

Acasta is the oldest rock on the planet (3.9 billions years) and is found near Yellowknife. Painting by Marilyn Robak. 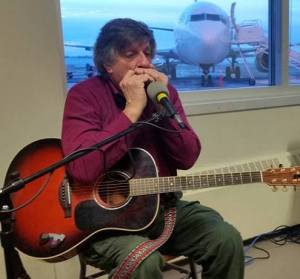 Jonathan Churcher on Stage in Yellowknife at Le Frolic.

Lay Down Beside Me written by Don Williams

Lay Down Beside Me Alternate Mix

This Dream of You written by Bob Dylan